There are many interesting things about humans but one thing that leaders have and others do not is a vision. Vision involves seeing not what is there today but what could possibly be there in the future. This is something I have heard many times in my professional and academic careers but I did not fully understand it until I was fortunate enough to visit the Museum of Modern Art in New York.

As I have matured, I have found that most modern art just doesn’t really speak to me. A great example of one that does not speak to me is that was a white square painted on a white canvas (Kazimir Malevich’s Suprematist Composition: White on White from 1918).  The painting pushes the limits of abstract art to the limits and while some talk about the movement created by the off-kilter square, I find that the painting is not all that interesting to me. My mother-in-law has a saying that fits in nicely here, “isn’t is good that we all have different tastes”.

In visiting the MoMA in New York, I did find a handful of paintings that actually did speak to me. One, in particular, is one that I find is a great example of vision and optimism, which I had not thought possible for ‘just a painting’.

That painting was André Derain’s Charing Cross Bridge from 1905-06. 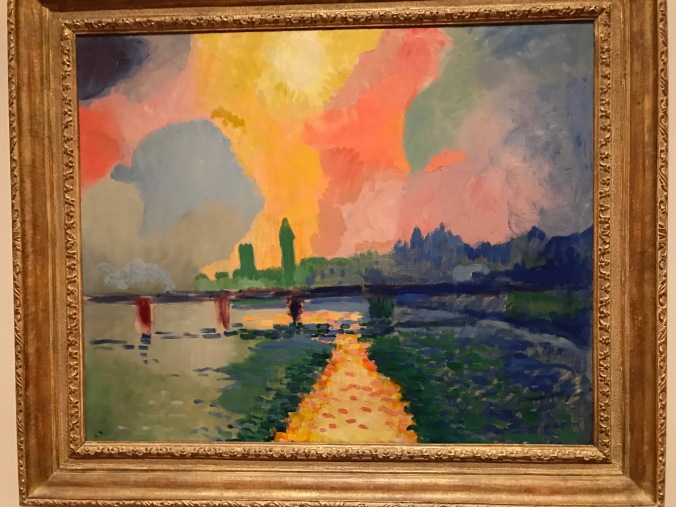 This painting is both immediately reminiscent of London but yet is far too bright to be the foggy London that we all know. The sky is lit up with beautiful yellows, oranges, pinks, and blues. The water of the Thames is not the murky, grey water that we would expect (especially in London in the early 20th century) but instead is green and blue, reflecting many of the colors in the sky. The city itself becomes increasingly green in the distance, instead of the usual blue we see with our own eyes as objects move off into the distance.

What is important when it comes to understanding this painting is understanding the context of the time. From about 1850 to 1900, the art world was going through the realism movement, which meant painting things as they were. Instead of painting the exaggerated emotions and the intense drama from the proceeding romantic movement, Realism sought to portray the real and the typical- ordinary people doing ordinary things. This was followed closely by the rise in photography.

Initially, people were fearful that photography would steal the thunder from painting because now instead of painting the world as we saw it, we could take a picture and that would do as good of a job (if not better), in far less time.

However, André Derain and other painters in the Fauvist movement started moving in a different direction. This painting was initially ridiculed and the colors used deemed far too startling to be any good. The imaginative, unbridled colors he used certainly did not reflect the reality of London so what was the value in this painting?

Optimism. This painting speaks not to the London that existed in 1905 but to the London that could be. The bright colors invoke more fun and light-hearted feelings while there is a beauty in this painting that London exhibits, once you get to know the city better. Art critic T.G. Rosenthal summed it up best: “Not since Monet has anyone made London seem so fresh and yet remain so quintessentially English”.

As leaders, we see every day what our workplace, our church, our community… actually is today. We can see all the good, we see all the bad. What can make us better leaders is not only seeing that but seeing what can be. This will require changing but that change should bring about growth. Experiment, play, create a workplace that allows for happy employees.

What are some other examples of vision that help your company? What do you want to do to make your company, community, or planet a be a better place? Let me know in the comments section below!

Welcome to my blog! I'm excited you are here to join on my journey to finding better leadership. Hopefully you find what you are looking for. Let me know what you think!